So finally the rail bridges are behind us and we ride the last bit of the BAM top Tynda. We did it WOW what a challenge and an amazing and difficult experience. Without this particular group I think the whole trip would have been very different. We relay stuck together helping each other through thick and thin and keeping the motivation up. The final part of the BAM was a 350km ride in the pouring rain. It was crazy and about 10 times during that day I thought about digging a hole and going to sleep in it. We were shattered and cold and wet and sick of the BAM and just wanted the day to end and of course it felt like the longest day ever. Getting to bed at 1am after dinner and a hot shower did make me feel a whole lot better though.

But the next day was a very sad day for me. I woke to the news that my closest friend had passed away after losing her battle with Cancer. I was devastated and tried very hard and unsuccessfully to just get on with the day but it’s harder to ride while crying than one thinks so I hated that day. We also said goodbye to Cesar in Tynda which was another sad event as he is one of the best guys I have ever made friends with and like a big brother to me.

So off we headed to Yakutsk 1000km away. 350km later we stopped and camped for a final time as a group. The next day saw us on the M59 for 650km a KILLER and absolute killer we got on the road at 7am had a couple of very very short stops for lunch, to get some water, a couple of pee breaks (I’ve never peed so quick in my life but we really were pushed for time) and a front tyre puncture. We really pushed it that day and after 16 hours finally got into Yakutsk. This is where we (Phil also ended his trip here) said goodbye to the other guys. I was so down at this point after the news about Angie, saying goodbye to Cesar ending the Russian part of the KUDE expedition and now having to say goodbye to the rest of the team. I just cried and cried and fortunately Gareth has big shoulders and let me use them to cry on he is a great great friend and I miss so very much.

The guys will continent to Magadan and do the Road of bones I am GUTTED that I cannot join them however have 35days to get myself through Russia, Kazakhstan and Kyrgyzstan to China. If I did go to Magadan I would only have 25. If I pushed up to 600km a day I would make it but pragmatism prevails and I realise that I am dead tired and if I did that would burn out and not make it. If I was not travelling for the next 4 months nothing would have stopped me getting got Magadan but my expedition is not a 2 month London to Magadan expedition like the others it but a 6 month Zurich to Singapore via Siberia expedition and I want to succeed.

So that is it no Road of Bones but jeez after doing a 9 day BAM huh can’t be bothered with a 2 day road of bones J I will take 3 days to rest, clean my gear and repack by stuff plus fix a few things on my bike including a broken pannier rack and then head off South on the Solo part of my trip. 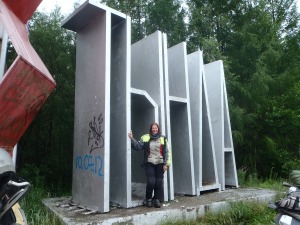