The ride from Puebla to Queretaro was another long easy boring highway but I made good time and was excited about getting to Queretaro to see Daniel and Aline. After leaving the Yucatan the one thing I have noticed is the increase in traffic. There is very little traffic all over Mexico and the increase was not that much until I got about an hour outside of Queretaro. Wow it was nuts the traffic was almost bumper to bumper except driving at 100km/hr. The Mexicans are not bad drivers just incredibly impatient and drive fast. After the lovely quiet road of the Yucatan this took me by surprise and I had to shift gear back into crazy Latin American driving mode to survive.

The landscape had also changed it is a lot drier more arid in this region and reminds me of some areas of South Africa. Aline and Daniel live in a new suburb is a stunning house. The area is really nice and very safe, I liked it immediately. I cannot even begin to describe how awesome it was to see them again, they left Switzerland a year ago to come back to Mexico and seeing them again was fantastic. I had planned on staying 3 nights but ended up staying 5 due to the ferry timetable to La Paz. I was so happy to spend the extra days in Queretaro it all turned out really well.

I was suffering from quite a cold when I arrived and over the next coupe of days it got worse finally breaking the day I left. So it was really good to just have one place to stay, relax and recover. Aline was awesome, she looked after me really well and would put up a huge argument if I even tried to wash a single dish. I am not used to staying at people houses and not helping out, but Aline was having none of it, I felt extremely spoilt 🙂 Other than seeing Aline and Daniel again it was also great to see their cats Trotsky and Frieda, they are the most beautiful cats, a bit weary of strangers but I like them a lot. The best pet they now have is a little cocker spaniel called Luke. He is the sweetest dog you have ever met, he was abandoned in a house and Aline rescued him. I just totally fell in love with Luke and wanted to bring him home with me … I don’t understand why Aline would not let me do that 🙂 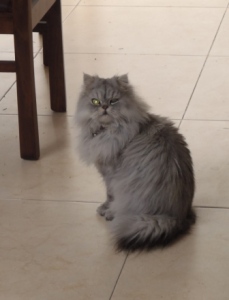 Trotsky who looks like he wants to take over the world

Frieda contemplating life with a bike in the house

I was so busy over the 5 days in Queretaro it went so fast. I went sightseeing, shopping, house hunting, out to eat, off-road riding, walking and also just relaxed. Aline and I went into Queretaro town and had lunch with Rob, who was on the Amazon tour with me. It was so nice to see him again and catch up on all the news. He is a really nice and funny guy, we had a great lunch and then Aline and I went shopping. Unless you are a girl who hasn’t been shopping for over 8 months you just won’t understand how much fun I had. I will admit that I am not a shopping girl, I usually hate clothes shopping. However when you haven’t been shopping and get to go with someone you know and like it is just great. We did also do some sightseeing and Queretaro old town is a really lovely town, well worth seeing.

Aline and me with Rob

Aline and me at the train transport museum 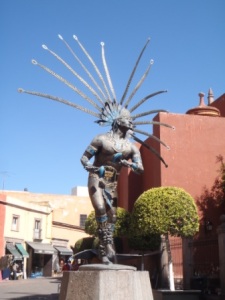 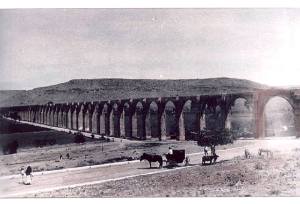 What the Queretero aqueduct looked like when it was first build

We went to see a couple of houses as Alien and Daniel are looking to buy a place. I love looking at houses as I imagine decorating every house I enter. However what we did the most of was eat, the food in Mexico is fantastic and when you are with people who live there you go to the places that serve the best food.

When you go to a good restaurant you get good food, good drinks and a quality Mariachi band

Daniel also spoilt me by doing a service on my bike … in the living room. His sports bike lives in the living room, and when he does any work on bikes it is in the house. I was quite shocked but also amused, I think Aline is amazing to allow that.

Daniel and I spent the Saturday going sightseeing and riding off-road. It was one of the best days I have had on the trip. We went to San Miguel which is a beautiful city. We also went to see two abandoned haciendas that were old mines, but are now just ghost towns and very interesting. On the way to the first one we stopped in a tiny village that Daniel had not been to before and accidentally come across as we were off the beaten track and this town isn’t even on the map. It has the most stunning little church, where we met two Canadian couples one of who have a winter house near there. Like all Canadians they were very nice people. It took Daniel and I 11 hours to ride 240kms (over half off-road) and do all the sightseeing we did. We got home just as the sun set, exhausted but extremely happy. 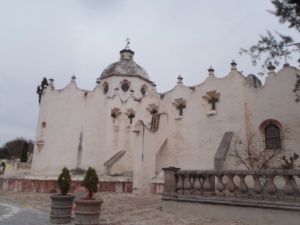 Santa brigida mine in Pozos

looking down one of the old mineshafts, scary stuff 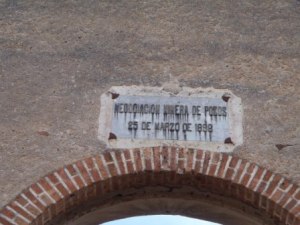 Date above the door is 1888. Kilns at the Santa brigida mine in Pozos, these were the first kilns on the continent

The Ccinco Senores mine in Pozos

Some of the beautiful scenery we saw 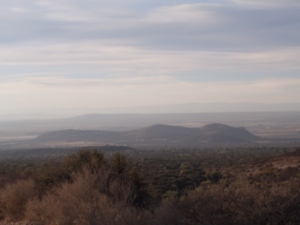 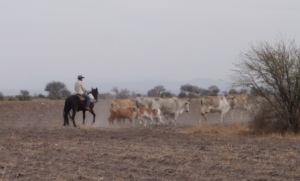 I spent the Sunday sitting in the TV room vegging, I watched 3 movies with Luke and just chilled and tried to get over my cold. It was a good day. The following day I had to leave for Guadalajara in order to get the Mazatlan to catch the ferry to the Bahia peninsula. I was so sad to leave Daniel and Aline I had such a great time with them and have already made plans with Joern to come back and see them and more of Mexico.