I liked Costa Rica instantly. Isn’t it funny how you can enter a country and get a feeling, I think every country has its own feeling. I am sure a lot of that is pre-conceived ideas but I’ve had moments where I have been apprehensive about a country and then loved it and also had the opposite. I like that each place has its own feel, a bit like a personality. 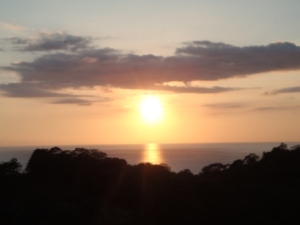 Beautiful sunset from a restaurant with squirrel monkeys playing in the trees and macaques flying overhead .. paradise

Costa Rica, although also being in the dry season is a lot greener than Panama and it is also hotter.  However I love riding through the lush green forest where you can smell that damp earthy smell. This is definitely my favourite kind of scenery. The roads are good and the people are so nice. I stop to get petrol and am immediately greeted with a lovely warm smile and a few friendly words from the petrol attendant. I also meet a fellow biker, who is from Costa Rica and riding around for a few days with his nephew both on GSs. We talk roads and he tells me how I will enjoy the route I have chosen and that he has no suggestions that I should change anything.

I had a short ride from the border to Parque Nacional Manuel Antonio but just loved every minute of it, especially when I started getting glimpses of the ocean through the trees.

The Brother of the owner of the hostel I stayed in was a biker and had just ridden a GS800 down from California for his brother. So we got to spend lot of time talking bikes and central American routes and it was great. The place was amazing and I certainly could have stayed longer which happens to me quite often but I just itch to be on the road. Only staying one night and wanting to make the most of it so I did a rain forest night tour and it was so worth it.

The guide was fantastic and I learned a lot, it is more about the reptiles, insect and arachnids you see than any fluffy things but we did her a good few birds and saw a really cute yellow one sleeping in his nest.  We saw a few toads, frogs and a Jesus lizard. The highlight of the reptile sightings was a tree frog and a fleu de lance, the most poisonous snake in Costa Rica. It was a baby but the guide made sure we were very far from it as it was curled up and poised to strike. He explained that the babies were more dangerous than the adults as they have not learned to only inject partial amounts of venom so deliver the full load that can kill a human in a few hours. We saw some interesting insects and spiders (smallish ones) including one eating a teeny tiny frog. Although that would have freaked me out a year ago I now find spiders fascinating, not that I’d get very close but this was a particularly interesting sighting. That afternoon I had seen two squirrel monkeys playing in a tree outside the restaurant and also a racoon running across the road so I did get my fair share of the fluffies as well.

fluorescent scorpions, apparently all scorpions glow if you shine an ultraviolet light on them, interesting

the spider eating a tiny frog, well not eating it yet just injecting the venom as the frog was still moving

the guide with the cat-eye snake

The next day I rode up to La Fortuna to see the Volcano Arenal and to get into the cool mountains after the heat of Panama. Cool I got, it rained and rained and then rained some more. It was not a particularly freezing rain and not a torrential downpour but it was a hard enough drizzle that I got soaked just walking to the store. I didn’t mind actually after all it is a rain forest. I was just sad that I did not get to see the Volcano that was shrouded in clouds or even do a small hike. I had booked for two nights so just made the most of it and relaxed and drank chocolate milkshakes.

all I could see on the road to La Fortuna

Back on the road I passed Lake Arenal of which I could not see much due to the cloud and rain. However an hour later I got to see a piece of what I had missed and it was stunning, and I was rewarded with the biggest fattest rainbow I’ve seen in a long time. I had a great day riding and it made me sorry that I was leaving Costa Rica although I had heard wonderful things about Nicaragua.

Since the Central American border crossings are a nightmare I wanted to get as close to the border as possible so that I could get to it early. So I decided to stay in an eco hostel just north of La Cruz and once again was really disappointed that I was not staying longer. Fortunately I had got up very early so got to Casa Castilla by mid day so had the whole afternoon to do the little hikes around the rather large grounds. On the hikes I saw a lot of birds a rather large crocodile sunning itself on a rock.The place is just gorgeous and I had the cutest cottage so when I wasn’t walking I lay in the hammock and just chilled … I do a lot of chilling on this trip.

the crocodile at Casa Castilla

I was sad to leave Costa Rica but am extremely determined to come back with Joern as he would love it. 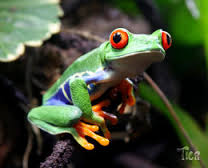