Uyuni is one of those places that most likely would not exist if it was not for the tourist attraction next to them. It basically consists of either tour operators, hostels, restaurants or bars and is kept alive by the Salar du Uyuni. One of the most visited attractions in the world and by far the largest tourist magnet in Bolivia. It is also what has brought us here as we both have the salt flats on our bucket list. 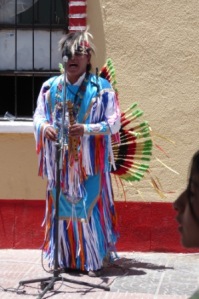 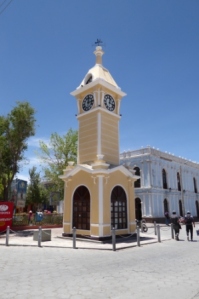 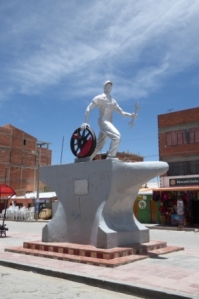 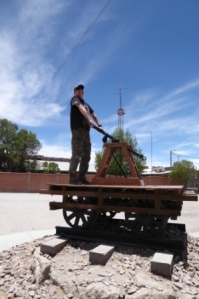 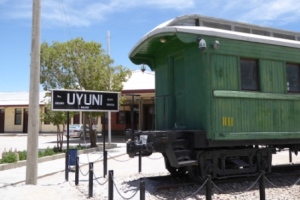 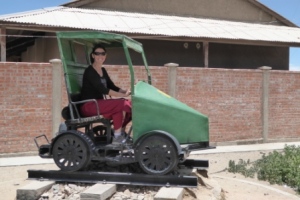 Waiting to meet up with Will and Stewart from England, we made an afternoon visit to the train cemetery on the outskirts of town. Due to a collapse in the mining industry in the 1940s lots of trains were simply abandoned in Uyuni and left to rust in the salty air. Rumour has it the actual train that was robbed by Butch Cassidy and The Sundance Kid is there as well. Quite a few of the trains were old steamers from the turn of the 19th-20th century, so who knows. Gave me a reason to relive some of my childhood fantasies pretending to be Sundance (he was much cooler that Butch, at least in the movie).

Graceful and athletic I jumped on one of the old coal tenders and then ran forward and hijacked the train from a surprised driver. What can I say, growing old is mandatory, growing up is optional. If you are a train enthusiast with knowledge about the old machines you could probably spend days here. 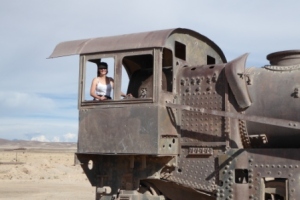 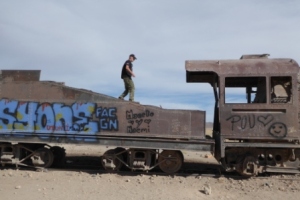 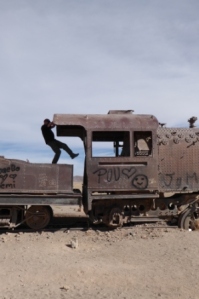 Joern pretending to be Sundance robbing a train 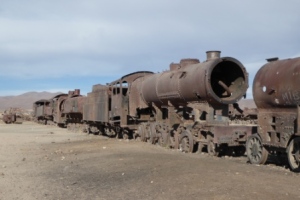 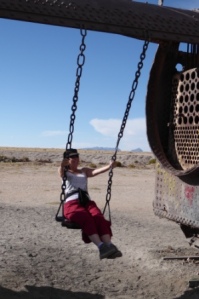 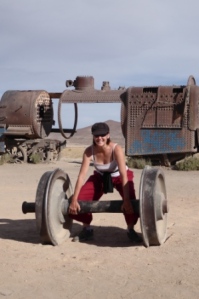 Back at the hotel Will and Stewart had arrived back from the flats. Two British bikers we met at the MCN bike show in London in February, as they were getting ready for a tour from Alaska to Ushuaia. Just like Lorraine they had Altrider sponsoring them with protective parts for their bikes, and when they heard about our plans we figured we would meet somewhere on the way, which turned out to be Uyuni.

They had been on the road since March and had added Australian backpacker Natalie to their pack. We had dinner together and just swapped stories (they had way more than us) and talked for hours. Simply awesome people and despite only having met them once before it was like being with old friends. 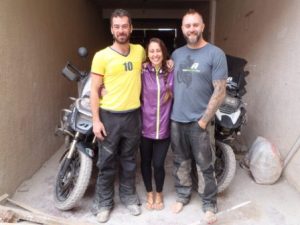 I would love to have spent more time with them, but they had arrived a day before us and were heading south the next day. Seeing their two fully kitted dusty GS’s parked in front of the hotel made me feel a bit sad about having left the Africa Twin behind as I sooooo wanted to go on the salt flat on a bike instead of in a car, but hey. Shit happens, deal with it.

Next morning we parted ways again with big man hugs and headed for the nearest entry to the salt flats at Colchani. Entering the flats is like driving on to another world. Driving in the mountains there is always either a valley or another peak close by. On the Salar the horizon opens up and wherever you look there is just a white flat surface. As we started driving towards the “island” in the middle the village behind us slowly disappeared under the horizon and left us in a world where distance and direction does not exist. Turn 360 degrees and it will look the same the whole way round except for a few mountain peaks in the far distance. 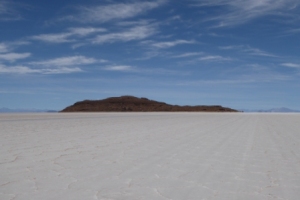 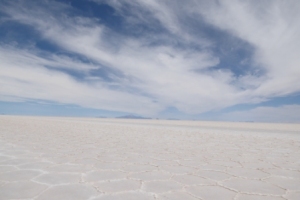 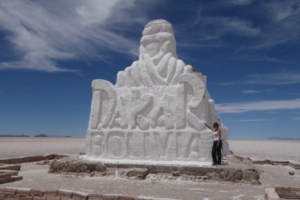 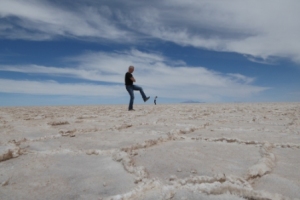 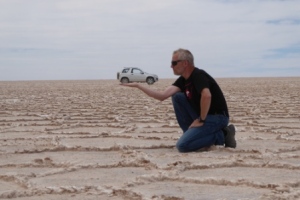 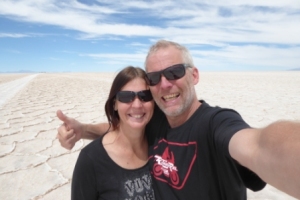 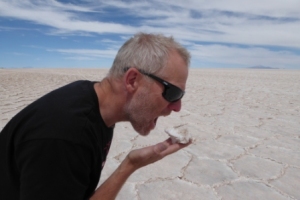 Judging how far away another vehicle is, is almost impossible since there are no reference points at all. No plants, trees, animals, hills, nothing. The Salar is in fact so flat that it is used by astronauts on the ISS to calibrate their distance measuring lasers. The entire 11000 square kilometre area varies only a few meters in height and is due to its size easily visible from space. We did of course stop for the traditional trick photos of making small objects appear large or vice versa due to the lack of sense of distance, and also had a taste of the crust. It is VERY salty alright.

There was also something fascinating about the thought that we were basically driving on the world’s largest empty parking lot. I could have closed my eyes while driving without having to worry about hitting something. Swerve left or right, who cares. The closest solid object is 50km away. And on top we were 3650m over the ocean. 1000m higher than the highest mountain pass in Switzerland. And it is flat as a pool table!! About 65km later we reached the Isla Incahuasa. It is a small oasis of rock and cacti with a few houses for exhibits. Not overly exiting so after a short visit we headed back simply following the trail we came on. 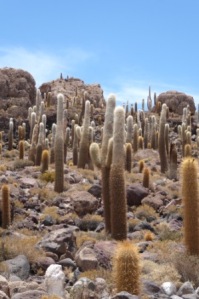 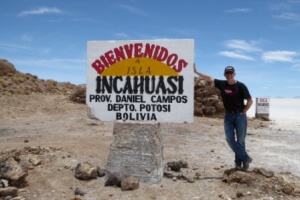 Salar du Uyuni. Been there, done that, did not get the t-shirt though. 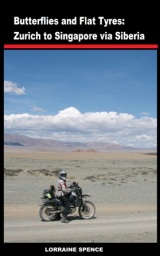