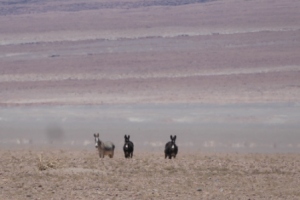 Wild donkeys of the Atacama. We came across a few of these herds of donkeys which I at first thought belonged to the nearby villages. However I was told that most of them are wild herds, cool.

We decided to ride up to Chaxa lake, which has the flamingos, as a test ride for Joerns bike. The ride was great and the lake flamingos stunning. I loved seeing them, there are 3 different species of flamingo in Chaxa and some have the brightest pink wings which you can see when they fly. We met another German biker (we seem to be meeting a load of Germans on this trip, which is cool) He bought a bike in Antofagasta and is touring around Chile for a couple of months. Travelling by bike is becoming very popular. Sadly we did discover that Joerns bike was not fixed, so knew we would have to take it to Calama to the mechanic. Unfortunately the following day was a bank holiday so we had to spend another chillaxing day in San Pedro de Atacama and take the bike to Calama the following day. We decided to do the Astronomical tour and it was great. We got to see some star constellations through a telescope and also saw the Tarantula Nebula which was great.

On Wednesday we got up super early and headed to Calama to get Zulu the Africa Twin to the mechanic. Calama is not a fantastically interesting town but it was okay and we were more concerned about the bike than sightseeing. The mechanic was great and we got Zulu back before 7pm with a clean carb and jets as well as some tuning done to help him cope with the altitude. 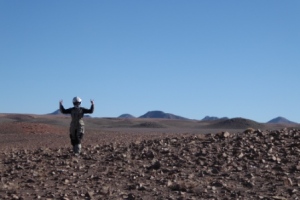 A walk on Mars

There are a load of shines all along the roadways in Argentina and Chile. They are for the people who have died in road accidents. This one was the largest and most elaborate we saw. It was very sad though as the person was only 22 when he died. 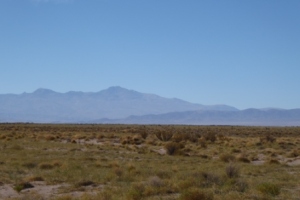 Excited to be back on the road again we got up early and headed for the Argentinean border. What an awesome day. The border crossing was easy the weather great and once again the scenery stunning.  Since a picture paints a thousand words I think I’ll post pictures of the landscape instead of trying to describe it. 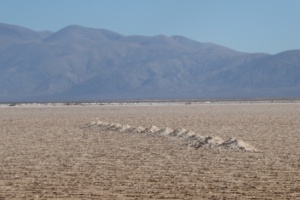 We spent the night in a tiny town called Susques but found the cutest little biker friendly hostel with the biggest Cacti I have ever seen.

In Siberia I stayed in a 1 goat town, in Chile a 1 horse town and now in Argentina a 1 Lama town and this is the Lama.

This church looked like it has a Donald Trump hairpiece