Heading north we decided to avoid the motorway and took the scenic secondary roads and once again that was a good choice the scenery was just fantastic. 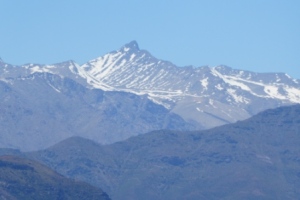 We decided to stop over in a little town called Ovalle as I was just too tired to carry on. Since it was Sunday everything was closed and we were getting rather desperate to find an open restaurant. I went to ask in a coffee shop which was just closing and bumped into a businessman from Santiago and a couple of colleagues who were also struggling to find an open restaurant. The owner had suggested a place to him and he offered for us to join him. 3 places later we finally found an open Chinese, literally the only place in town servicing food. It was great not only was the food awesome but there was tons of it and when it came time to pay Fernando would not let us give him a cent, how hospitable is that. What a nice and interesting man, he owned a company that does work for the government supplying machinery to small dairy farmers. He had lived in many different countries in the world and it was interesting chatting to him.

The motorway to Bahia Inglesa is a small one and very scenic so we decided to take that instead of the secondary roads. At one point we both just stopped in awe as the desert turned pink. It took us a few seconds to realise that the entire desert was covered in pink flowers just stunning. 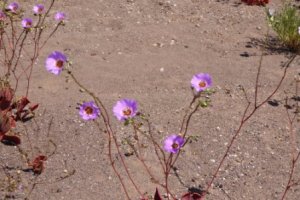 Bahia Inglesa is a very very small seaside town and as it was out of season it was very quiet, just the way we like it. This time the bikes got the room with a view and our windows faced away from the sea. However the hotel was so nice and the view from the patio was just great. I cannot describe how good the food was in this place we decided to stay for 2 nights to enjoy the seaside and every meal was mouth-watering. We went for long walks on the beach, Joern took some great photos and we just chilled. 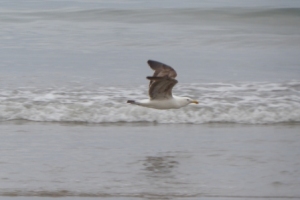 some buzzards on the beach eating a dead seal

enjoying a walk on the beach 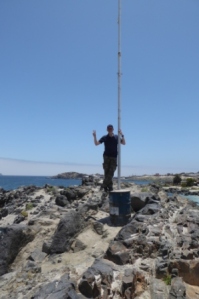 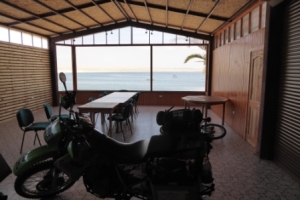 this time the bikes got the sea view

The road to Antofagasta was a bit boring so we just got down and did it. We did stop at the hand in the desert sculpture called Mano Del Desierto – Hand of the desert. A huge sculpture of a hand coming out of the sand, pretty damn cool. 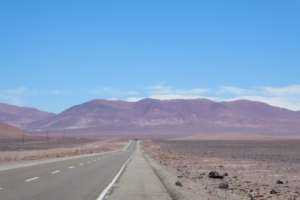 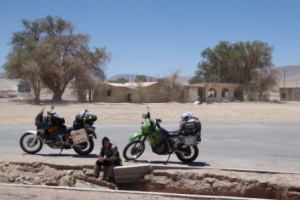 having a break eating peanuts in a ditch

The hand of the desert, pretty cool

We arrived in Antofagasta in time to get my new rear tire put on. I had found a note on the internet suggesting a road with a few bike places where I could get my tire changed. On arrival we found Fernando in a small shop called crossteam. The mechanic was out and they did not have a machine to change the tire but Fernando said he’s do it no problem for 10000 pesos USD15 and he deserved every penny. Fernando his younger brother  and sister all race motorcross and by the look of the pictures and trophies in the shop he is pretty good. The town is pretty boring and it was a quick stop before heading off to San Pedro De Atacama.

we stopped for lunch in a tiny roadside café and then noticed that it was one of the check points from the Daker in one of the previous races, super cool 🙂