We had arranged to meet a friend of a friend, Walter Buschmann, in Puerto Montt who could help us with a dry place to work on the bike. Walter then arranged for a college of his, Jorge who had a pickup truck, to meet us at the ferry and pick up my bike and take it the 7kms to Walters company. Once again showing how helpful, generous and hospitable people are the world over.  After dropping he bike Jorge then helped us find a hotel and told us that Walter would come and fetch Joern in the morning on his way to work.

The next day, Joern got his bike and rode up to Puerto Varas to collect a carburettor that Mick from Ride Chile had left for us at a hotel. Carburettor in hand, Joern fetched me and we started fixing my bike. I felt like I was performing heart surgery on my little gadget. The fault was so clear, a torn vacuum membrane in the carburettor. The new membrane fitted perfectly and we eagerly started my bike which just purred, kicked him into 1st gear and wumpppp he stalled … DAMN hell and all those nasty words. We could not believe it, totally deflated we asked Walter if he knew a good mechanic. He gave us directions to Johnny’s company, Austral Motorsport. Johnny spoke perfect English and said that unfortunately his best mechanic was out with a sick family member and they would be able to help us on Monday. Walter agreed that we could leave the bike at his place until Johnny fetched it on Monday. 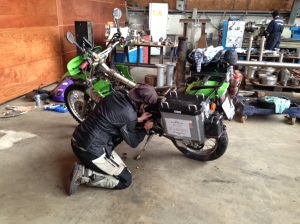 hole in the vacuum membrane

Making the most of a bad situation we decided to stay in Puerto Montt and just do a couple of day trips as miraculously the weather report for the weekend indicated some gorgeous sunny days. 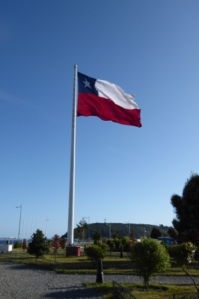 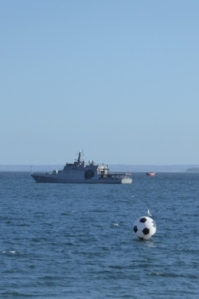 We got up early on Saturday and headed to Puerto Varas and the Osorno Volcano with me riding pillion on Joerns Africa Twin. What an awesome day!

The ride was great, the skies were clear, the roads were excellent and the scenery stunning. The views of the volcano across the Llanquihue lake were just breathtaking. We stopped for coffee at the little roadside café with a view of the volcano and a few pet lamas for company. Man the lamas just make me laugh. Brownie, a teenage lama, was extremely tame but very cheeky and curious and you had to watch your clothes as he nearly took a bite out of Joern jacket while we were having coffee. 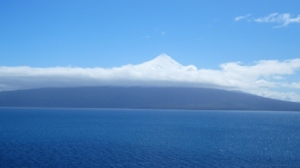 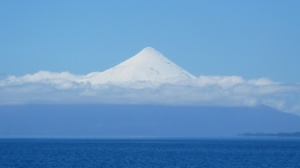 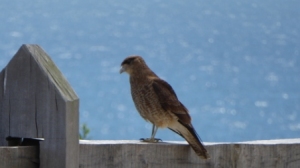 We also met two Australian riders, who we first met on the ferry, again. They had hired bikes for 5 weeks to tour Chile, which is clearly a very popular place to tour as I have seen more bikes in travelling in Chile than I have on the entire 3 months prior to entering Chile. I frustratingly cannot for the life of me remember their names 😦 but they were really nice guys and after we stopped and chatted to them on the road they rode ahead of us, but stopped on their way back to say that it was impossible to ride around the lake as the bridge was out and the road closed.

Damn our plans were thwarted, but no problem we simply turned around and went back to Puerto Varas for lunch and then rode on to Frutillar Bajo, where we could get a view of the volcanoes across the lake.  The view of Osorno was well worth the ride, Calbuco was sadly hidden behind some clouds, but we did get a great view of it from the road later in the day when the clouds lifted. 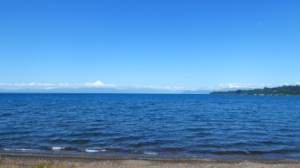 We had such an awesome day that all frustration due to my broken bike was forgotten.

The following day we could not decide exactly what to do as there were quite a few options. So we decided to do the same thing again … well not quite. We rode up to Puerto Varas and over the bridge we could not cross the previous day and straight up to a national park called Petrohue. There we went for a short hike and a look at the very pretty small waterfall. Thereafter we completed our round the lake trip which we could not do the previous day and got a closer look at Osorno. Another great day on the bike 🙂 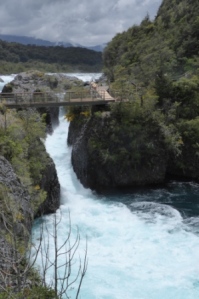 I could hardly sleep on Sunday night being seriously nervous about the diagnosis on my bike, which turned out to be very simple. Sometimes things are just strange, we had to have 2 problems at the same time both of which have the same symptoms, the carburettor membrane failure and the side stand kill switch failure. We had thought about it on Friday night that perhaps the side stand switch was also faulty but since it was bucketing down and Walter had already closed up shop and left for the weekend we decided to just leave it for the mechanic. 30 minutes later the bike was running again … if only we had thought about that when it did not run after we fixed the carburettor, but we were so deflated we just could not see the wood for the trees, and we probably would not have had such a  fantastic weekend doing the mini day trips, so it was all good in the end.

On Tuesday we headed off with sunshine in our hearts … sadly not in the skies but we were so happy to be on the road and heading north we ignored the rain which lasted all 500kms. I was just ecstatic to be riding my gadget again that the kms just flew by. We stuck to the motorway which is boring but we just wanted to get to warm dry weather after day and days or riding in the cold and rain. Soaking wet we arrived in Los Angeles and found a hostel for the night.

Wednesday was another long 500km motorway day but at least a dry one 🙂 🙂 🙂 and we arrived at Hostel Casa Matte in great spirits and looking forward to seeing what Santiago had to offer.  Christian and his wife Francisca own the most stunning hostel, it feels more like home than a hostel and is a bike friendly place as Christian is a serious biker himself.  I just fell in love with their house it is an old renovated 4 story building with gorgeous high ceilings and wooden floors, amazing views from the rooftop terrace and some really funky and beautiful decorations including the 1976 Yamaha XT in the lounge. There are a number of bikers at the hostel at the moment, all really nice and friendly as travelling bikers usually are.  2 bikers from Argentina, 2 from Chile and a Japanese lady called Mai. Mai has resigned from her job, bought a great little XT200 and is heading down to Ushuaia next week, how awesome is that. 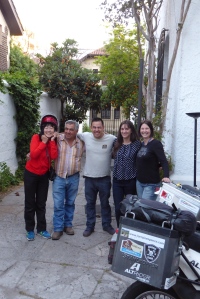 On Thursday (and no surprises here) we spent the day at the mechanic fixing my bike again, this time the front wheel. For a few days now whenever I went around a corner I could feel the slightest tiny vibration of the wheel. I started to think that I was just being paranoid as I do get paranoid with my bike but it was, to me, just so obvious. I checked the front wheel and could not see/feel anything but when Joern checked he said he could feel a slight grinding resistance when shaking the wheel. I decided to play it safe and take the bike to a mechanic. Johnny Mottos (real name Ruben) might just be the best mechanic on the planet. Well, mechanic / entertainer. This guy has no webpage, does no advertising, his shop doesn’t even have a sign and yet business is booming.

Louis, Johnny and me

When he first looked at the wheel he said he could not see anything wrong, but then he took the wheel bearings out. The one spun smoothly with no issues but the second had a distinctive grinding rough sound/ feeling. Voila I was not just being paranoid the wheel was faulty. We spent the whole day at Johnny’s place while he replaced the bearings and got a machinist to straighten the axel which had the slightest bend to it. Johnny was so thorough I was really pleased . He also greased the steering column, and replaced the fork oil. I had not even realised how spongy my forks had become as it is such a gradual change but now they feel like new. We also had a BBQ (called Parilla in Chile) lunch with Johnny and his friends during which time  Johnny entertained us with some dancing … it was a good laugh and a very good day. Johnny does not speak English but one of his friends Louis who does was there and did the necessary technical translation for us. Louis is a really nice guy and  runs a bike accessories shop called Ru7austRal, he rides a KTM and has the cutest dog which rides with him in a special dog carrier case which is strapped to the back of his bike.

Since we spent an entertaining day with Johnny we decide to stay in Santiago another day so that we could go and visit Mick the Danish guy from Ride Chile, find a post office, do our washing and get to see some of Santiago. 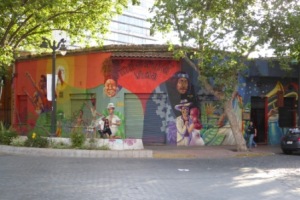 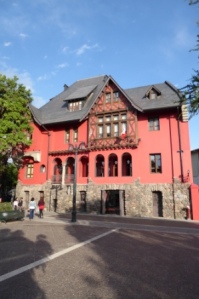 view from the roof terrace at Casa Matte 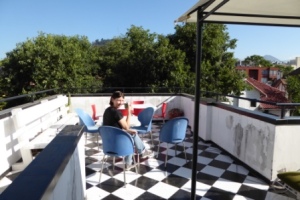 Breakfast on the terrace

I was dead keen to head north to go visit Lorraine Chittock who lives 2 hours north of Santiago in but could not miss this opportunity of seeing Santiago so had to delay our visit by a day.