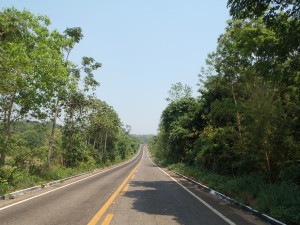 Frajola had arranged for me to stay in Porangatu with another biking couple Junior and Marcia. The ride there was easy and I had their address setup in GPS. About 10kms outside the city I passed a police block, there are many of these in Brazil but had never been stopped not once, until this day. A policeman stepped into the road and waved me down, I was surprised but pulled over. There was a biker standing next to him and I assumed he had been pulled over as well. The office said something which I did not understand and the biker said ‘’documents, documents’’ as I was about to reach for my passport still very confused I noticed the name Junior on the bikers patch. J man oh man they really had me going I can only image the look on my face. We had a good laugh at that, the officer is friend of Juniors and helped him play the joke on me.

Junior and Marcia what a lovely couple

Juniors Mascot, I just love it 🙂

Although Junior and Marcia do not speak English and I do not speak Portuguese with Google translate, the few words I recognized, hand gestures and expressions we managed to communicate and had a wonderful evening. I was exhausted and really felt the need to just chill and have an evening in and that is exactly what Junior and Marcia did for me, they made me feel completely at home, it was wonderful. Great company, excellent food (home cooked meal of the fish Junior had caught, which we ate outside on their huge patio), great music (we listed to good old classic 80s music bringing back some fantastic childhood memories for us plus of course queen and guns and roses) what a great evening I could not have asked for a better evening. One of the things I just loved was Juniors mascot, the gorilla just perfect.

I had an early night and slept very well and late so headed off to Trindade at about 9am.

The trip to Trindade went really well, I was back in the riding groove and just enjoyed every minute of it. It was still a long boring road but I love it. I also realised that unless you are happy in your own head you cannot be an adventure biker. This is not a criticism as not many people enjoy true adventure biking, they prefer to be on a tour in a group of just do short day / week trips, which is fine it’s all just different strokes for different folks. When I get in the zone I just love it and can ride for hundreds of kms alone and content. This is how I felt on the ride to Trindade and was really glad to have my old self back again 🙂 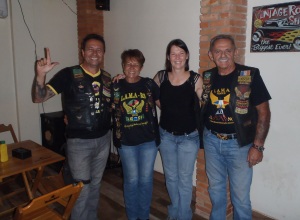 Ediberto, Nubia, me and Jean Paul

I arrived in Trindade where I had arranged to meet Jotope (Jean Paul) we had agreed to meet at a petrol station where he said I could ask the ladies in the near pharmacy to call him. However as I arrived he arrived to, very fortuitous. I followed him and after meeting his two gorgeous put bulls, who he adores ( and I love to see that 🙂 it made me very happy ) and his girlfriend Nubia, I had a nice shower and put my clothes in the wash ( I had not washed for 3 weeks and my clothes stank so this was a much needed activity) I had a chat to Jean Paul and heard about his life. WOW what an interesting man, I think we need to have a few more conversations. He is a civil engineer by trade but spent 27 years in the French foreign legion and retired as a Captain after he was shot 3 times in the back. He was sent to 104 different countries with the legion and he speaks, French, English, Portuguese and Spanish. After retiring he bought a farm in Portugal with this wife however after she passed he returned to Brazil, living initially in the south and the moving to Goiânia, because it rains too much in the south and he likes the heat. Jean Paul will only ride goldwings and has had three covering almost a million kilometres on the 3 bikes, but he only rides the old models not the new ones. He does what we all do on trail bikes on his goldwings and has ridden across Asia, including Mongolia on his goldwing as well as the northern part of Africa from Morocco. The current one unfortunately has alternator problems so he is waiting to get a new part when he goes to Mexico in a few weeks. He is also president of the Brazil chapter of L.A.M.A Latin American Motorcycle Association.  What an interesting and very nice and hospitable person. I really  Liked Jotopes house it is an open plan house with an outdoor kitchen plus a patio with BBQ, what I liked were the honeybirds so used ot humans they flew in and out and he could put his hand right next them when they were using the feeders just stunning. He also has the largest mango tree I have ever seen 🙂 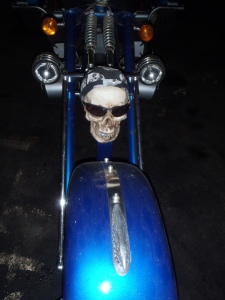 a few of the bikes at the bike meet

What a great and welcome interruption to my ride out of Trindade. I met up with Rui and Sinomar on the motorway and was taken for lunch, how cool is that. I was so late I thought they would not be there as we’d arrange to meet mid morning and it was already lunch time due to my oversleeping. THANKS guys for waiting it was great to meet you two crazy Brazilian bikers. Thanks Rui Leite for the lovely T-shirts and Thanks Sinomar for the great lunch. Rui does not speak English however Sinomar does speak some, however once again all language barriers were transcended by their wonderful hospitality and the common topic of bikes. It was just awesome to meet these two guys I will not forget riding along the motorway and seeing two bikers flagging me down, such a cool sight. 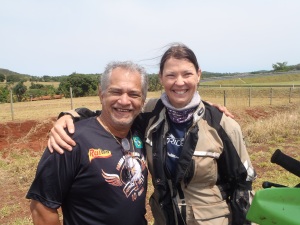 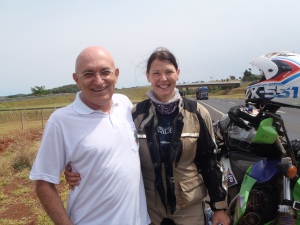 At about 17:30 I was so tired I started to look for a hotel and on the horizon saw the Pousada Onsen Rio Preto a thermal spa and thought ‘’damn it I could do with some thermal spaing right now, so no matter what the cost I’m staying’’ The hotel looked okay so I pulled up and checked in, only to find that this is where thermal spas goes to die. The place must have been wonderful in its day, huge rock pools, plenty of thermal pools, tennis courts and massage building. You could really imagine how it once looked, but sadly no more. Only two of the small thermal pools were full, one was warmish and the other slightly warmer. The many stunning pools, rock pools and thermal pools all lay empty, the walking paths were cracked and the whole place was just worn and in need of a good lick of paint, so sad. However on the bright side it was cheap and the one warmer thermal pool was lovely 🙂 The hotel was slightly creepy though with only about 5 guests and made me think of the shining … so I put a chair in front of the room door that night … not sure what that would do against the creepy ghosts but it made me feel better. 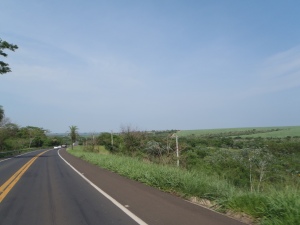 The following day I had a great 443km ride to Maringa, the weather was warm but just slightly cooler than up north and that was very welcome. I stopped on the way at a typical Brazilian roadside restaurant churrascaria a place where meat is cooked in Churrasco (BBQ) style. You find these places all along the roadsides in Brazil and the food is FANTASTIC. Every place I went to even if it was a petrol station restaurant had a buffet style lunches and this Churrasco meat available and boy are they good. I also bumped into a few bikers along the way which is always fun.  It seems Saturday is the bike clubs / groups day to ride as Sunday is family day in Brazil. There were plenty of clubs out and it just put me in such a good mood seeing all the bikes from unbelievably speed (remember these are Brazilian crazy riders) sports bikes to a group of Harleys and a small group of three wheelers. What a day 🙂 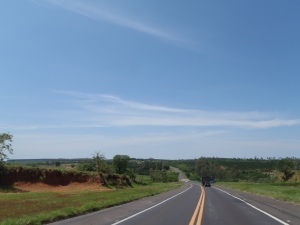 Day 8 to Foz Do Iguazu

I finally arrived at Foz Do Iguazu after 4620kms from Oiapoque on the border of French Guiana. I had just crossed the 5th largest country in the world, from top to bottom on my motorbike. The others being Russia (which I crossed in 2012) USA (which I will cross in 2016) China (which I did backpacking in 2001, and on my bike in 2012) leaving Canada on my bucket list.  I’ve now also travelled 80 countries in the world (my goal is 100 before I die) I’ll stayed in Iguazu for 2 days so that I could go and see the falls.

I got up early, caught the bus to the falls and wow they are stunning. I saw them before, during and after one of the heaviest rain showers I have ever experienced.  When it rains in Brazil it sure does bloody rain. It was coming down cats and dogs and after getting soaked I decided that I’d had enough of the falls and hopped a bus back to town. 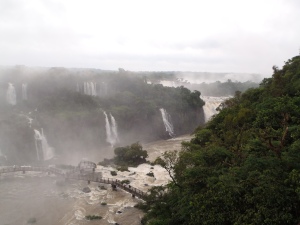 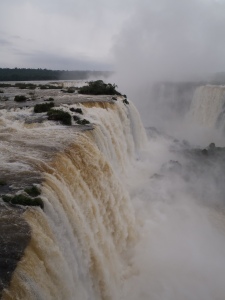 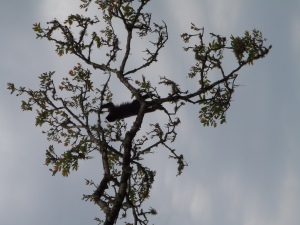 I asked at the central bus station about going to Paraguay and the guy said it could not be easier ‘’just cross the road and take the first bus that stops’’ which literally arrived as I walking towards the stop. It took 10 minutes and we were across the bridge in Paraguay, no border check or anything.

Ciudad del Este is border town across from Iguazu and my first impressions were not very impressive. It was dirty, crowded, smelly and full of shopping malls. The prices are really cheap so this is a shopping haven for Brazilians. I was sadly not impressed although I think the heavy rain that kept me inside the shopping malls had a lot to do with my bias which may be unfair. I did however stop for sushi for lunch and was to die for, the best sushi ever. I did not feel like walking around Ciudad del Este in the heavy rain especially since I was now soaked to the bone and still trying to fight a cold. So I came back to the hotel and spent the afternoon lying on my bed listening to the rain and watching videos, a very welcome warm chillaxing afternoon. I relay liked the Pousada I stayed in, Pousada Aloha, the people are lovely and the rooms are so nicely and individually decorated you just want to spend time in them. It really feels like home and not a B&B. 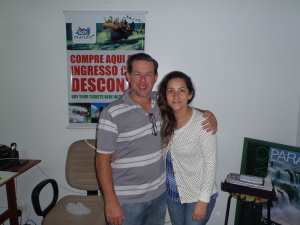 Junior and Gracia from Pousada Alaha