Reunited with the group we find out about the things that happened to them. The most sever being Pete’s accident. Pete t-boned a guy on a small 125 bike, the guy got back up and just rode away apparently he was quite young so I guess just scared. Pete damaged his bike quite a bit but it was repaired and Pete himself hurt his foot. Initially he thought he may have broken it but the next morning realised that it could not be broken and was just badly bruised and swollen, he was able to ride though as it was his rear brake foot and not his gear lever foot which would have been more difficult.

Rand also had a couple of accident he bumped into an army ambulance twice and also came off his bike in the bull dust a couple of times. His bike was fairly badly damaged the stabilizer arm was wrecked, his panniers came off and he damaged his lights. However lucky for him the hotel in Belem was 400m from a BMW dealer and they did wonders fixing his bike. He was also not hurt in any of the falls.

The group also had a number of flat tires over the two days. Jules had a flat one afternoon and the two guides were way behind the group. Not knowing how far they were behind, not having any way to fix the flat without them and being sick and tired of riding the bad dirt roads and waiting Jules left the bike with the keys and got a lift with Pete. It sounded like the group had a tough 2 days and were a bit, to say the least, fed up and ready to mutiny, plus they had not had luggage for 4 days which added to their discomfort. Roberto and Rick however got them back on track and to Belem safely, where they spent 2 nights waiting for us.

The original plan was for us to arrive in Belem and catch the ferry to Macapa the following day. However Mike vetoed that idea as he needed time to sort a number of things out with the truck and Venezuela so we stayed one more day. I was relieved as I needed to get to my luggage and do some washing as well as get my bike battery issue resolved, I was also exhausted after the truck trip and need to just gather myself and feel normal again. That done and the bike fixed with a new battery and Mike and Peter staying in Belem to get the truck fixed the rest of us headed out of Belem on the ferry.

testing Henrys hammock on deck of the ferry to Macapa

hammocks on the top deck

enjoying an ice-cream on deck 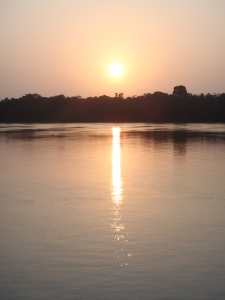 I just cannot believe how huge the Amazon River is

The ferry ride was uneventful even boring, we had 3 cabins supplied with free cockroaches and plenty of them (6 beds, for the 4 ladies and Rob & Pete the 2 injured riders) and the rest of the group stayed in hammocks on the deck.  We mostly just slept, ate and chatted. Except for Rand, Rob and Pete who had a cigar and rum party in the one cabin. I joined them for a few hours and spend the night highly entertained by these 3 funny guys, you had to be there but trust me it was one of the most fun evenings I had on the trip. The following day after zero sleep in my cabin as the captain had his music blaring full ball all night. I sleep with very good ear plugs as am very sensitive to noise at night and could not sleep a wink with this cacophony and Jules would not close the cabin door as she said she needed the fresh air, but would not put the cabin aircon on instead as it was then too cold. How she slept through that noise is beyond me, but let’s just say I woke up in a less favourable mood.  I tried to sleep later that morning but to no avail so just gave up, at least I don’t need to get off the ferry onto a bike so I’ll live.

5 hours later we arrived in Macapa.