Riding into the new Myanmar capital Naypyidaw was an enormous surprise. In the middle of nowhere the government decided to build a new Capital, so there is no slum, no traffic, no downtown, no litter and oh no people. It’s kind a weird there are huge beautiful new hotels, suburbs, apartment buildings but seriously few people. I am guessing it is still being developed. The houses around the main movement buildings are mansions…well that was expected. The roads are pristine clearly NOT made by hand huge 8 lane (I kid you not 8 lane) concrete highways filtering into 4 and 6 lane roads. Well I take my hat off to the town planner this is truly forward thinking, more towns should be built with these road systems. They may take time to fill up though. Being the ONLY vehicles on an 8 lane at 5pm was the most fun ever..drag racing anyone 🙂

After staying in another luxury hotel, oh yes this is the best thing about Myanmar. Other than the old capital Yangon where the hotels are hugely expensive and not that good unless you pay a fortune. The hotels are expensive but fantastic the 2 and 3 star hotels are genuinely like 5 star hotels and honestly better than the 4 star hotels I get to stay in for work. So we’ve had a great time staying in 2 and 3 star hotels which are like hmmm I don’t know how to describe them just superb. Naypyidaw was no exception the hotel we stayed in was fantastic. Many of the buildings especially the old colonial ones  in Myanmar especially in Yangon are really beautiful but totally worn down and in need of a good cleanup and paint. If any money was spent on that the cities would be 100 times nicer.

I had a really interesting encounter after breakfast while I was waiting for the guys. I was sitting in the hotel reception and military general sat opposite me. He asked me where I was from and how I was enjoying Myanmar. He was the director of the military research department in Myanmar and was at the hotel to meet some Israeli Drs for a big medical conference that was happening in  Naypyidaw. We only spoke for a few minutes and I had no idea just what kind of question were acceptable to ask. But we spoke about the tropical diseases the conference was about, and where (well lets call him Dr T, as I am not sure a Burmese general would want his name printed by some strange biker tourist women) Dr T studied and what I thought of Myanmar. He gave me his business card and was a really nice friendly man who seemed really happy to talk about the level of medical care in his country 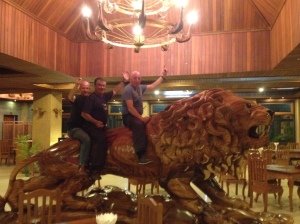 The following day we went to see the new Parliament buildings. We managed to get as close as the gate. We were stopped about 250m at a police stop but Eric is a charmer and they let us leave out bikes there and walk up to the gate. The parliament building complex is like a mini city, it is HUGE and totally flamboyant but extremely beautiful. Cleary someone was making a statement. It must have cost millions and millions a start contrast to the poverty in the country.  But then again what country isn’t like this. I am not quite sure what to make of the Myanmar government there certainly seems to be a level of corruption I just cannot make out how bad it is.  The Burmese people seriously do not have the same  fear / caution as the Chinese people and will quite freely voice their opinion to us about the political situation. For example one of our guides mentioned that people used to make way for any official vehicles on the road but now he knows he does not need to anymore so doesn’t.  One of the things you see all over Myanmar in cities and rural areas and on every street are bottles of clean drinking water. Even in the smallest villages clay pots are put out on  a designated table by  a designated water bearer every day. The clean bottled water is supplied by the government so that everyone in the whole country has clean water. One will not find anything like this in China or in fact in any country I have travelled through. 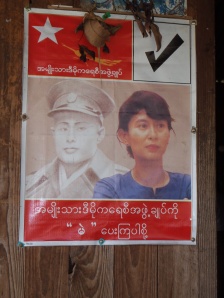 We were stopped only twice in on the Myanmar roads at police road blocks. The police were very friendly and just took our passports and made us write our names and passport numbers in a logbook, no one asked for money and non was given. So the police and either genuinely not corrupt or have just not leered to ask for bribes like their Russian counterparts. 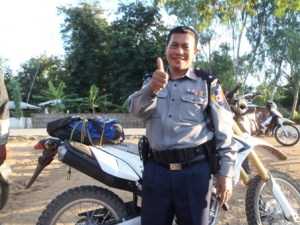