After flying to Mandalay from Yangon we discovered that only two of Eric’s new Honda CRF 250Ls had arrived, the other two would arrive the next day. Itching to get on the road we agreed to double up for a day, and take turns riding. Eric doubled up with Maurice who is a self confessed bad passenger, and I doubled up with David. David has been riding bikes for over 30 years and used to race so I knew I was on good hands. However he paid me the best complement a man could ever give me when he said that if I wanted I could ride the entire way because I was a very good rider a  he was quite relaxed on the back of my bike. WOW that compliment just made my year. 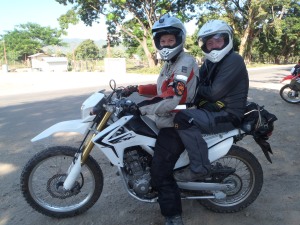 Well what a day and what a laugh. There we were David and I two up on this lovely little Honda CRF250L which we nicknamed Daisy as in driving miss daisy. David is not a big guy or over weight but obviously weighs more than me. I had never lifted anyone on a bike before and once we were moving things were fine but every stop brought a comical OMG you’re leaning the wrong way scream from my lips …something David did on purpose just to tease to me, since he was tall enough to put both feet flat on the ground if the bike tipped, whereas I was just touching the ground on tip toes.

After getting out of town and on the open road things were just fine and we had a whale of a time travelling together. Until the road forked and I just kept going since I had been told by Eric that the route is really easy just follow the main road. the next minute I see a truck heading straight for David and I, on MY side of the road. I swerve the truck swerves I look to my right and see a scooter or three riding on the road parallel to ours and ask David, are we supposed to be on that road, he says he doenst’know, are we?  And simultaneously we realise we are on a duel carriageway the road did not fork but in fact split into a dual carriageway with a large green island in the middle with trees and plants so we just did not notice it. I say OMG David we’ve got to change sides, just as he says quick turn here just as I ride past the slip that would have allowed me to get Daisy from one side of the dual carriage way to the other. We both just pack up laughing, now I am trying to ride this little 250 with a passenger which I am not used to and we are in hysterics, and now still riding on the wrong side of the road. Within minutes we had found a second little path I SLAM on breaks and we slip over to the correct right side of the road. Hmmm maybe you had to be there but I was were killing myself laughing. I think David and I might just make a good team.

I also thoroughly enjoyed riding behind David when we rode up and down the twisties, since David has been riding for so long and used to race he knows how to take a corner. Well even on a little 250 I could tell that this man knew what he was doing and since I am very relaxed on the back of a bike and lean into a corner with the rider it felt fantastic to cross the mountains on the back of David’s bike. The funny thing is when I ride I just cannot bend into a corner but ride corners like an off-road rider sitting up and pushing the bike brown, one day I’ll learn to do twisties the right way.

I have always wondered when I saw pillions on an adventure bike why they did not learn to ride a bike themselves, assuming it must be so boring to be a pillion riding across a country. Well when David rode and I was on the back I  got a glimpse of what it would be like, and I surprised myself and had a ball. I am very relaxed on the back of a motorbike and spent my time really looking at the scenery without the need to watch the road, and of course taking loads of photos. I can now see that I am really wrong there is some enjoyment to being a pillion and experience the road with someone, although it does not appeal to me and I would never do it on a trip I will never ask the same question of a pillion rider again.

Like any county I have travelled through I saw some wonderful things on the road,  the scooters piled up with all sorts of things and people. Well in Myanmar we saw them take this to the next level, when we came across a group of scooters transporting a number of brand new in the box scooters to the next town. We came across this sight at a small roadside restaurant where the drivers had stopped for a rest. They told us (it never cesses to amaze me just how many people in Myanmar speak English) that each scooter was carrying 4 new scooters packed up in the boxes, engines wheels and all. How these riders did  this I will never know but they are very strong men.