Waking up to another perfect sunny day in Mongolia I had mixed feelings. I was happy to be in Mongolia and happy about the perfect weather but pretty down about the fact that Dozer had to go on a truck back to UB. However since I had to walk into town again I thought I’d go to the little black market and see if I could get the carburettor screw. I found an old carburettor and the lady wanted usd150 ha ha well that was not going to happen especially since I just needed the tiny screw out the bottom. Then I saw one and recognised it immediately and she was not letting me bargain for this one…as I said before I don’t have a good poker face and she clearly saw the desperation on my face. So I paid the 10usd for it and ran back to Dozer…no luck it was just too big DAMN I just paid usd10 for a usd3 screw which didn’t fit uuggghh well I guess it’s was the truck for Dozer and me.

I did have a good morning watching the men take the two gers down that they were shipping to UB, very interesting.

When I asked the English / Mongolian speaking guide who happened to be at the ger camp to help me find a ride I did ask him to explain to the lady how a bike should be secured to a truck and be positioned behind the cab.

Once the men started loading the gers, behind the cab, I asked the guy in charge, who spoke some English, where my bike would go. His answer ‘don’t worry’ it will go on’…hmm okay it’s your truck. By the time the truck was almost completely loaded and without my bike I started to worry. There was about a foot of space left at the back of the truck but the bottom was filled with the ger canvas so the bike would not actually sit in the truck but be balanced on this canvas. As soon as they started lifting my bike I shouted ‘STOP, there is No way you are putting my bike there forget it, it will fall off’ and the English speaking guy put his hand on my should and said ‘don’t worry’ it will go on’ and I answered ‘no it won’t’ but he promptly ignored me and the five guys just lifted Dozer and put him on the back of the truck. They then folded the canvas over him like a little Samosa package and started to strap it all together. ‘NO, STOP take the bike off, I’m not having this it isn’t even tied to the truck I’ll find another way to UB, get my bike off the truck’ I yelled but to no avail, they COMPLETEY ignored me clearly 50000 tugrats (about usd40) was not worth loosing because of some hysterical woman. Hmmm sometimes I really wish I was more assertive there are a few people I know both men and woman that these guys would not be able to ignore. Well what I was I do but wish Dozer luck and climb into the cab, destination Ulaanbaatar.

Throughout the journey all I could think about was Dozer grabbing hold of the sides of the trucks with his ties like claws and screaming for help while the truck bumped and swayed its way along. It seemed that dozer was not actually the last thing they put on the truck, they pilled more and more stuff on top of the already laden truck and then threw a huge canvas tarpaulin over it and strapped it down. Breaking every European loading, safety and transport law known to man. I remembered David saying to Richard when we were loading our bikes on the previous little trip ‘leave the guy alone he knows what he is doing, haven’t you seen these Mongolian trucks packed up, these guys do this for a living’ hmmm I now realise they haven’t got a clue. These guys don’t tie any of the cargo down to the truck they only tie these huge tarpaulins to the truck and all the cargo inside moves and shifts and sways with the truck. Sorry not clever.

We were finally on our way and I thought that the cab in the truck was really big and comfy and this 6 hour drive would not be so bad after all. Famous last words. I am NOT a nervous passenger but OMG I have never been so scared in all my life.

At least on the dirt road the driver (who was very nice and I liked him immediately) took it easy going very slowly and trying, completely unsuccessfully, to avoid the bumps and pot holes. After 2 minutes I grabbed for the seat belt (not a requirement in Mongolia so I thought nonchalantly I would give it a miss, but not for long) and wrapped it around my body so tightly I almost shut off my air supply. I think my eyes must have been the size of saucers as I gripped my hand and dug my nails into the palm. I was however not actually worried about my own safety although death was a definite probability on this journey, or perhaps getting septicaemia from the bloody wounds I was now inflicting on my palm by my oil / bike dirt encrusted finger nails. My concern was my bike sitting in his little samosa canvas package at the back of the truck.

FINALLY we hit the tarmac and I start to breath, possibly a good thing since the driver was giving my blue pallor some strange concerned looks. Oh what mistake as things were just about to get worse. Since the tar roads in Mongolia (fortunately this road had a few kms breath space in between) are riddled with pot holes, the driver spent his time swerving from one side of the road to the other, and not at a nice speed like on the dirt roads either.  The cargo in the back, and my baby bike, clearly swaging with every movement, I was more sea sick on this 4 wheeled barge than any boat I have ever sailed on.

At one point we had two wheels on the tarmac and two in the gravel curb at what felt like a 45 degree angle and I was just waiting for this top heavy load to topple us right over, OMG OMG OMG I’m going to die soon became my silent mantra. Especially when stealing a glance at the driver I saw him sitting slightly askew with one hand on the wheel and the other on his hip, a bit like a cowboy out of a western movie might sit astride his horse, then when I saw the fag hanging out of this mouth I realised he thinks he’s the Marlborough man, OMG OMG OMG I’m going to die.

Finally we stop for a break, I crawl out of the cab on rubber legs rush to the back off the truck to see Dozer and he is hanging half (at this point only the wheels are actually over the truck, the handle bars, tank and seat are just suspended mid air) off the truck lying completely flat held on my a single strap, the other two having come loose, OMG OMG OMG Dozer is going to die. I quite rightly freak out… ok that is an exaggeration as I’m not really a freak out kind of lady, but no way was this guy going to ignore me now. He comes to the back of the truck and shakes his head looking concerned and I say very calmly but assertively ‘not good, not good at all, we need to TIE this bike to the truck’ erm that was dumb the guy does not speak a word of English. OK I get the best hand signals I can muster and VERY assertively show him how the bike needs to be tied front and back to the bar behind the cab. Thanks goodness he has a long enough rope to  do this, and sheepishly does as I ask, realising that I was right back at the ger camp when I showed some concern. Dozer better secured we head off again.

I’m feeling slightly better about Dozer now that I think he’s tied more securely but the journey gets no better. When I see the driver talking on his mobile, while lighting a cigarette and driving with one hand swerving the truck from side to side trying to avoid potholes and THEN overtaking all in one single movement. The light is now fading and our 6 hour journey now looks like it will take 8. The worrying thing is that I am convinced the driver is night blind when I see a bus stopped in the middle of the road hazards flashing and he doesn’t, a hairs breadth from hitting it he SLAMS on breaks and swerves around it, fortunately to no oncoming traffic, I finally close my eyes. I realise at this point that I’d make a good marine since surviving this kind of torture must surely be the best army training a person could have.

We finally arrive in UB to the Oasis guesthouse and I crash into bed absolutely exhausted. Sadly the next day I was as sick as a dog having got some sort of tummy bug. I did not have deli belly but could not keep any food down before rushing to the bathroom to throw up and felt very nauseous the whole day, but I know it’s just a 24 hour thing and I’ll be just well enough to crate Dozer up tomorrow ready for the flight to Bangkok. I will go to Bangkok via Korea so will take the opportunity and stay in Seoul for a few days since I have never been there before. 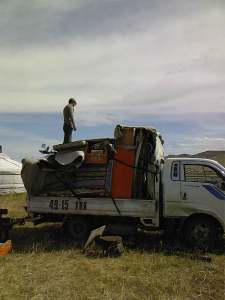