One of the strangest riding idiosyncrasies in China is filling up with petrol. Some (very few) stations will not serve motorbikes at all and some (even fewer) will fill the bike up directly. The normal practice is to park the bike on the side of the station and use a petrol can, mostly a very very large tea pot with a bit of hose pipe on the spout, to fill the bike up. The biggest tea posts take 7l and most bikes take 22l so we are talking at least 3 trips and guessing on the 3rd one just how many litres you need in the final pot. Now imagine (usually the stations only have one and in rare cases two pots) doing this for 8 bikes, DAMN it’s slow, what a crazy system.

The other funny thing is the toll roads, which are free for motorbikes yippee. The funny thing is that you can’t cross the barriers, you need to ride around the toll gate on little slip roads or the parking lot some of which are closed off and someone needs to come and open them. On some it is hard to see which option there is for bikes. So sometimes we’ve just ridden straight through the little gaps to the right of the barrier. This causes mayhem in China and the toll both attendants go NUTS, why I am not sure and we cannot figure if we are breaking the law or not but from the reactions I guess we are.

On one such occasion Richard and I could not see where the bikes needed to go so just followed a car though and as Richard passed the barrier (the one and only barrier we came to in China that was as long as the road and had no gap on the right hand side) it came down almost on his head. The handlebars were on one side and Richard was on the other so he could not move. The attended went ballistic at him and told him to reverse and go around where the bikes must go. However not only were the cars behind us, so hmm no way could we push the bikes back but Richard was stuck. It took what felt like an eternity for another attended to get this attendant to come out of his booth and help Richard. All he did was lift the bar and push it aside (Richard had tried to lift it but not realised that it could move sideways and every time he touched it the attendant got more angry, and we were worried he’d have a coronary so just left the barrier) Once he had moved the barrier we carried on, quite simple and easy but still very confused as to why crossing the barriers on a bike causes such an outcry.

BEST thing about china so far the food..say no more yum 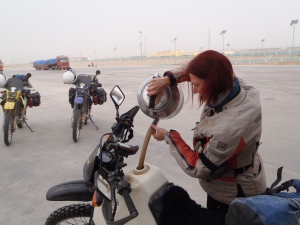 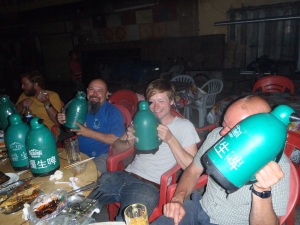 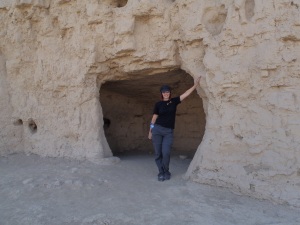 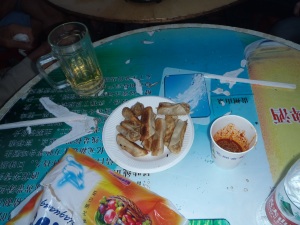