Finally we leave for Russia for the 3rd time. This time from Mongolia we will take the BAM (Baikal-Amur-Mainline) road and Road of Bones to Magadan. Coms will probably be less frequent but I’ll try updating the blog when I can and since my SPOT is working I can be tracked on

Midday Tuesday and we say goodbye to the Oasis guesthouse in Ulaanbaatar, this is a great place to stay and full of interesting people mostly bikers travelling across Mongolia, so a lot of stories shared over a coke or beer. We did one small trip to the nature reserve outside UB two days before we left because we were missing our bikes and felt the need to ride 🙂 but not before doing a ritual for good luck 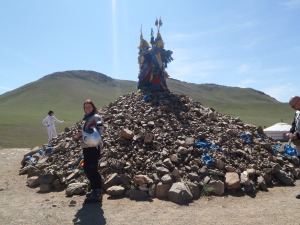 We head off to the Russian border (uuuggghhh another border crossing) and camp about 50 or so km shy of the border ready for an early start in the morning. We had our final and very nice Mongolian dinner in a small town before settling in at camp. I mention this because Mongolian food is dire. In Ulaanbaatar you can eat well and find a number of good restaurants serving every kind of food. We had the best sushi ever and great German food at the Oasis. We even had a Mongolian BBQ. There is nothing Mongolian and Mongolian BBQs they are made up but still scrummy. Mongolian food consists mostly of goat (if I never eat goad again it will be too soon, it is the WORST meat ever and leaves a bit of an after taste) with noodles. The food is very fatty or oily and I believe the fat is yak so most things have yak fat taste or smell. It is edible and filling and we ate it but if there is a choice have something else. HOWEBER saying that I’d still rather eat Mongolian than McDonalds so it can’t be all that bad 🙂

NEVER have the traditional “tea” it is not tea but sour yak or mare’s milk and literally made me gag. They also make an alcoholic drink call airag out of it by fermenting the mare’s milk, fortunately we never came across it.

So as I was saying the final meal in a small town restaurant was chicken and rice and really good noting like we’ve had in the other small roadside cafes throughout Mongolia.

I of course had to drop my bike in the parking lot, and this moved the hand guard jamming the gear leaver. So the next morning I planned to loosen the guard and sort the problem out, after figuring out exactly what that was. However Phil (one of the other riders) was convinced the guard was bent and even though I was not. My plan was to take it off turn it over and compare it to the other guard to see if it was or where it was bent. After Phil offered to help me and I said never mind Jeff (the expedition mechanic) and I are going to look at it together he still basically took over my repair job telling me what to do and how to do it then took my hand guard and walked away with it, leaving me rather confused, and not giving me a chance to compare the two guards. Then he came back with it said something about it still being bent and walked off and promptly broke it in half. Hmmmm no I was not impressed in fact I was incredibly angry. Now don’t get me wrong I genuinely appreciate the help and the fact that his intentions were good, but it’s not what people do it’s the way they do it. I really really like working on my bike and also enjoy sharing that work with people especially those who know more than me because I am still learning and know I have a lot to learn. All I can say is that when a rider is working on their bike feel free to offer your help but don’t basically take over, tell them what to do and then BREAK their bike uuuggghhhh (sorry Rant over but it had to be said, bikers etiquette people bikers etiquette!!!)